I won this book quite a while ago and it doesn't come out to be used very often. Although not committed vegetarians, we are firm believers in 'grow your own' which means lots of fresh, cheap veg often arriving in gluts. You would think then that this book would be invaluable - I certainly did - but for some reason it isn't the one I go to on the shelf and pull out when searching for inspiration. One reason may be the lack of pictures - the recipes are presented rather solidly, with often three columns of writing on a page. If you stop and read the recipes, they're very appealing - there's just nothing to grab the eye on flicking through the book. I'm hoping through this idea of testing cook books to get round to sampling more meals from it.

This isn't the first time I've tried this recipe but we've had a glut of cauliflower from the garden and it seemed an ideal opportunity to try it again.
This is fairly much what it sounds like by its title - a curry with leek and cauliflower as the main ingredients. There's also potato, onions and tomatoes in there, so checking the store cupboard before starting is a good idea. The only 'unusual' ingredient is turmeric, though it might be possible to skip it and rely on curry powder. I used a hot curry powder but this isn't specified and could easily be replaced by a mild one. 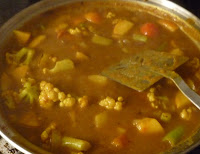 The instructions worked well but it's definitely a recipe where it's best to prepare all veg first - the instructions did say to do this but I thought I could manage - hunting tomatoes in the freezer while things burn in the pan is NOT a good idea!
There was a slight problem with the quantity - too much! What size exactly is a small cauliflower? I guessed but next time would use less.