For the second recipe from this gorgeous book, I'm trying something a little different -


When I reviewed this book I said that most of the ingredients would be easily found in a local supermarket but this recipe requires something a little more unusual - vine leaves. Now, you can buy these in a tin/jar but it's easier if you know someone with a vine in need of pruning - ME! We have several vines, inherited on the allotment, but none have fruited yet. I suspect we could be in for a long wait before our first grape harvest, so meanwhile I thought I'd try cooking the leaves.

The major cooking part of this meal comes in making the stuffing - with minced lamb and yellow split peas, flavoured with turmeric, coriander, parsley, mint and other herbs.

As I wanted to keep the fat content low, I reduced the amount of meat and increased the split peas. 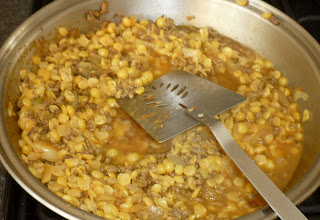 Coriander I had growing on the windowsill and some of the other herbs outside but for the more traditional "English" ones - mint and parsley - I had to use dried herbs.


Then rice was added to the mix as it cooked 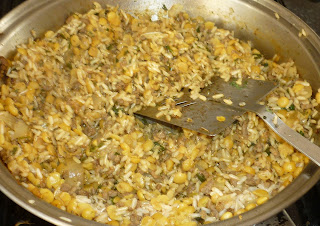 Then came the tricky bit - trying to roll the blanched vine leaves round the stuffing.


It was a little tricky!

The assembled parcels are then cooked in a tomatoey sauce for an hour or so. The end result was unusual without being odd - reminiscent of North African recipes I've tried with the vine leaves tasting rather like cabbage. The overwhelming flavour was of mint so I wonder if I used the right amount of dried herb. The trickiest bit was rolling the leaves up. Definitely something that takes patience! The same stuffing mix is used as well in the recipe for Dolmeyeh FelFel (stuffed peppers) and I think another time I may try it that way - or even just serve the lamb and split pea mix with rice.