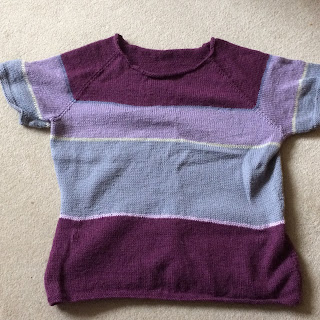 I'm determined to work my way through the stash of accumulated oddments of yarn, so that's going to mean a lot of stripes - and also a lot of garments based on this pattern which has become one of my favourites. I like woolen short-sleeved jumpers for winter as a warm extra layer over long-sleeved t-shirts; they keep my body core warm, while not having bulky sleeves to get in the way. Also, they don't take much yarn. For this I had 2 and a bit balls of maroon, slightly less of the grey, and a single ball of the lilac, plus really short oddments for the two narrow stripes.
From the armholes up I knitted all pieces together - not quite in the round but as one super-wide piece.  This helped keep track of how much of each colour yarn was left - and as you can see, there wasn't enough to make the lilac band as deep as the others. Let's pretend that was a deliberate design feature :)
Anyway, it worked, it fits, it works colour-wise with a lot of my other clothes, so all i need is cooler weather to be able to wear it.
Posted by maryom at 16:40 No comments:

Labels: knitting, use what you've got

One of the things I've started during this last lockdown since Christmas is the nurturing of a sourdough culture. I wasn't actually expecting great things of it, but it turned out to be easier than I expected to transform flour-and-water paste into something tasty. 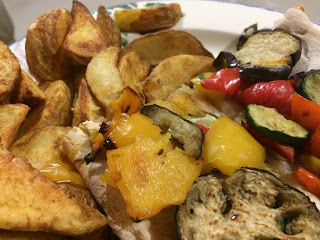 At first I was playing around with the daily discard - making pancakes with the batter, thickening it with flour to make cinnamon rolls, and tarts topped with sticky rhubarb or Mediterranean veg (an experiment to use up a frozen pack I received as a substitute for peppers, which turned out very tasty) 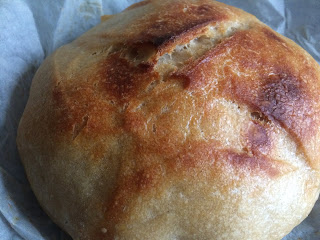 After a week or so the sourdough was bubbling, and ready to make my first loaf of bread. It didn't look brilliant, but tasted good - which is the most important bit.
I'd heard that it was possible to keep the mother culture almost indefinitely in the fridge, so I tried by putting half in a jar and leaving it there, but after a couple of weeks I seemed to be just left with sludge. 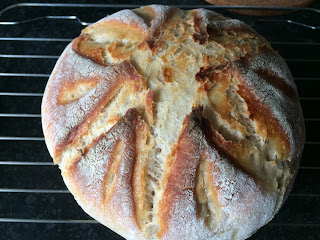 The other half, in the warmth of the airing cupboard, has gone from strength to strength. 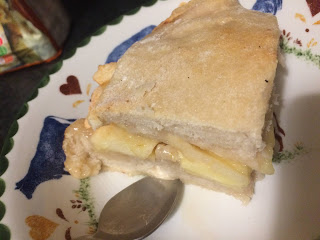 I've managed to bake a couple of respectable-looking loaves with it, cobs and mini-baguettes, and some strange half bread/half cake concoctions like this apple sandwich, but my favourite uses are for pittas and pizza, made with discard and strong flour. 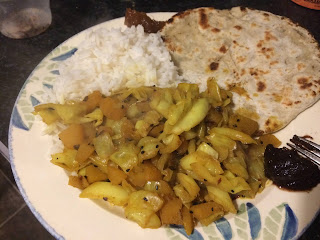 I now make these regularly, and I'm constantly amazed at how flour-and-water paste turns into anything so tasty. 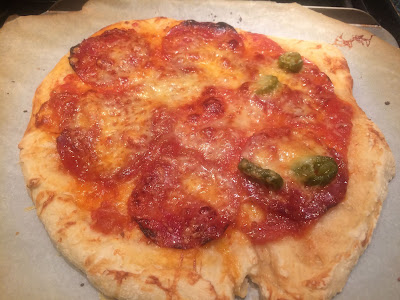 Hunter's Chicken from Pinch of Nom

Among the frozen ready-meals from my usual supermarket I have a favourite - Hunter's Chicken. It's spicy without being over-powering, and feels like something I could eat forever, but there's a stigma to eating ready meals everyday, and, let's face it, there's not much filling up my time these days, so I want to make some effort and find a home-made version. 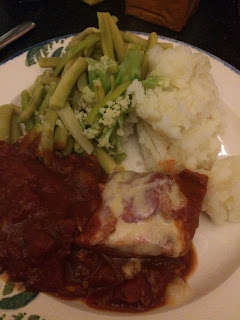 The recipes I've found among my books and magazine clippings vary widely - Nigella's Pollo Alla Cacciatore is lovely but nothing like my shop-bought Hunter's Chicken - so I'm going to work my way through them, find a recipe that's close, and if necessary from there I'll tweak the ingredients - a little more of this, less of that - till it's just the way I like it.

I'm starting with the version from Pinch of Nom by Kate Allinson and Kay Featherstone. Now essentially this is a book of weight-watching recipes, but use your regular full-fat cheese instead of the low-fat option, and add an extra dollop of potatoes plus cauliflower and french beans if you're not bothered about losing weight. I did :)

What I'd actually hoped for was a recipe that took things back to basics - tomatoes, peppers, onions, sugar etc - but as I've found before the Pinch of Nom recipes tend to call for 'prepared' ingredients, in this case BBQ seasoning and hot sauce, which all too easily vary between manufacturer, so I'm not sure I actually got the flavour they were aiming for
. Also, there's a LONG list of ingredients - balsamic vinegar, white wine vinegar, Worcester sauce, mustard powder, etc etc. Not a lot of each is needed and it's fine if you've got them in the cupboard but to buy them specially would make this far more expensive than my beloved ready meal. Get through that fussy list if ingredients, and the recipe is clear to follow.

The final stages of cooking suddenly required a lot of plates and pans but I don't have a dishwasher and I hate the proliferation of extra pots just for the sake of styling and presentation, so I skipped a lot of fussing about at the end, just added the cheese to the casserole dish and melted it there. It probably could have benefited from an extra minute or two under the grill but the potatoes and veg were ready, so I served it as it was.

It wasn't quite what my taste buds wanted though; a little too acidic (perhaps all those various vinegars), and the base flavour of tomato was too overwhelming. It's definitely on the lines of what I'm trying to reproduce so I have a good workable starting point from which I'll tweak the ingredients.

First knitting project of the year 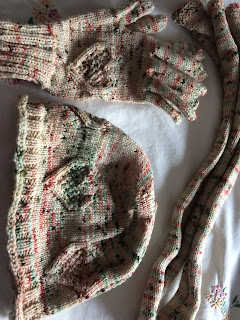 For Christmas my youngest daughter bought me (among other things) a couple of hanks of wool from The Camel's Yarn, based in Camelford, Cornwall.
It's a wonderfully soft, double knit yarn, in a colourway seasonally titled 'Partridge in a Pear Tree'.
My immediate thought with comparatively small amounts of yarn is to knit a scarf and/or a hat, but this time I felt I had enough to knit a pair of gloves as well. 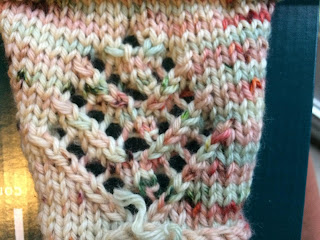 Having decide what, then it's on to thinking about patterns. I toyed with this lacy idea, sort of vaguely representing the 'tree' of its name, but decided gloves with holes in them probably weren't very practical. 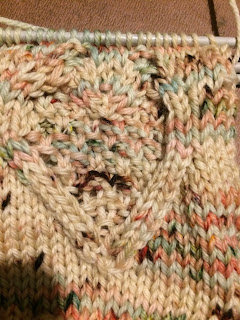 Flicking through a book of patterns I spotted this cabled heart design, and thought it would go perfectly, representing I suppose the 'true love' who gave the partridge, pear tree, and everything else.

Not being quite sure of how far the yarn would go, I started with the gloves, then hat, and was delighted to find I had enough left for a scarf; it's thin and quite short (not one to wrap round one's neck several times) but with all three it feels like a complete set. 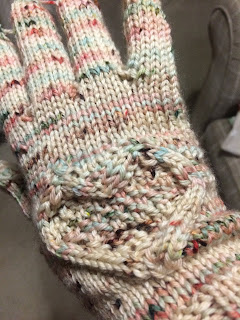 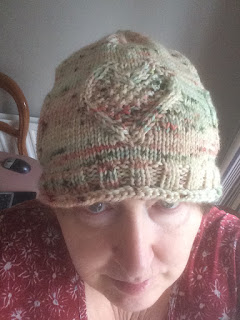 Helmet and jumper for a very small knight 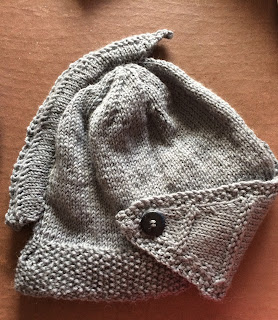 Before Christmas my eldest daughter spotted a knitted version of a knight's helmet, and asked if I could knit one for her 3 year old. A quick search of the web found lots of free patterns out there, and I picked this one from Sewing Away My Time blog. 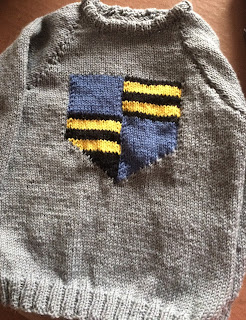 As I had more grey yarn, I decided to make a knight's jumper to wear with it - a simple raglan design in DK with a shield design on the front. It looks crumpled as it's not washed or pressed at this point as I was slightly hurried getting things finished before Christmas (as always) but for once it's about the right size. Now all that's need is a knitted sword ...
Posted by maryom at 12:02 2 comments: 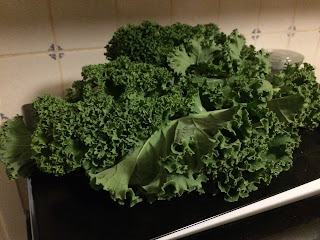 When you have a vegetable patch in the garden or an allotment you're going, from time to time, get a surplus of something or other. Hopefully it's something that can be frozen or pickled or turned into jam, but occasionally it isn't - or, as is the case at the moment due to tomatoes and runner beans, there just isn't space in the freezer. 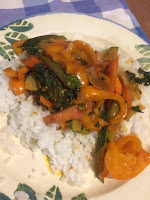 So, I'm working my way through a seemingly never-ending supply of kale. I'm not fond of it just boiled, as you might cook cabbage or broccoli, which leads to some interesting experiments. 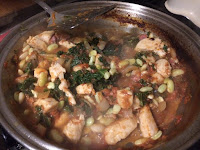 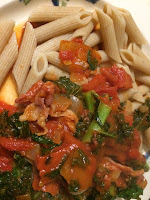 I like to add it, much the way I would spinach, to dishes with strong flavour, such as stir fries, chillies, curry, goulash, tomato dishes for pasta, with bacon chops in an apple juice sauce, and both in and shredded on top of enchiladas. 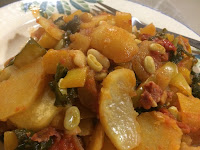 My favourite way though is none of these but roasted - with oil and spices - to make Chinese 'crispy seaweed'. 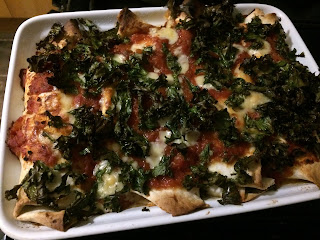 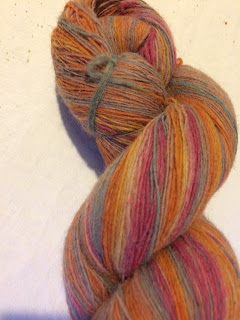 Just before Christmas my youngest daughter went to Riga for a weekend, and brought back this wonderful rainbow yarn for me.


I struggled a bit to decide how to use it - there wasn't much, and I wanted something which would show off the marvelous colours, while avoiding the obvious thought of stripes. 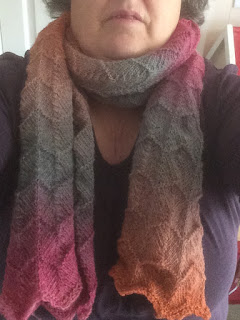 This is what I decided on - stripes with stitch interest. It shows the colours off to perfection, and worked brilliantly as a scarf. As a hat, though it looked strange, like a baby's bonnet or something a flower fairy might wear so I decided to rip that back and start again. 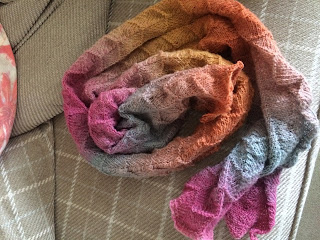 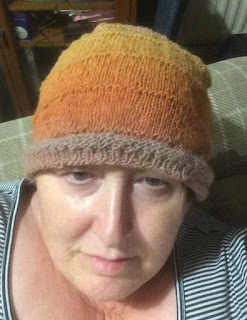 This time I went for a simpler plain stitch with just an odd row of reverse stocking stitch at intervals to echo the similar lines in the scarf.