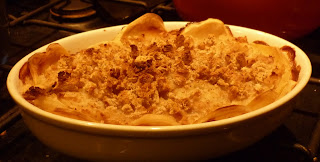 Faced with a glut of turnips I've been searching the recipe books for interesting ways to serve them - rather than just as extras in a stew. There may be a slight difference between swedes and turnips, but not one that I feel matters, so when I saw this intriguingly named recipe I thought I'd try it out. The strange name for this comes from the idea that it will cure the eater of any fear they may have of swedes - the edible kind, not people from Sweden. Basically the swedes (turnips) are cooked and mashed, with cream (though I used milk), then breadcrumbs, spices and golden syrup stirred in. A dish is lined with sliced potato and filled with the swede purée, then more breadcrumbs sprinkled on top and the whole thing baked.
I hit a problem quite early on with converting the 'big swede' in the recipe to the middling sort of turnip I'd got. The Abel&Cole cookbook prides itself on the fact that you barely need scales to make up the recipes - but in this case they might have been handy. Anyway, I decided my turnip was about half-size so altered everything accordingly then panicked over a lack of potatoes and added more - maybe too many as I ended up the base of the dish filled with them and some didn't cook through properly. I was also a little confused over quantities; the recipe "says serves 4 as a main course or 8 as a side dish". Well, I was cooking this as a side dish to go with vegetarian meat pies and half quantity was about right.
Anyway, we loved it. The ginger, nutmeg and syrup added a curious sweet and spicy flavour to a rather dull vegetable - and next time I'll go easy on the potatoes, and the amount of pepper I ground on top!
Posted by maryom at 10:48