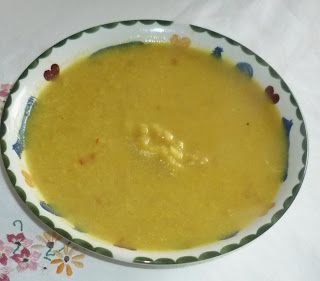 A long rambling title but this is really parsnip soup. I've a mammoth 4-5 inch diameter parsnip to use and happened on this recipe while trying to find my 'normal' one, so thought I'd give it a go.
Soups are always easy to make - in this case basically take two parsnips, onion, garlic, chilli flakes and turmeric, and boil in veg stock. I did encounter a couple of problems with the wording of the recipe though.
As I say, I've an enormous parsnip to use so I'm cutting slices off as I want them - which led to the first problem; the recipe calls for 2 large parsnips. How large is a large parsnip? I'm not a stickler for them, but it's one of those times when weights and measures can be handy.
The second problem - again with the parsnips - was there was no indication of how small to chop them. In fact it seemed to say pop them in the pan whole. Anyway, I chopped them into small dice as quicker to cook, and after that everything went well.
I didn't have single cream, as called for in the recipe, to hand, so stirred in some milk at the end - it was still creamy enough. I also skipped the cubes of cheese Slater suggests adding, so technically mine was just "a rich root soup" but still delicious and different to my normal 'curried parsnip soup'.
Posted by maryom at 15:26